WoW: To Be Mona

Waiting on Wednesday is hosted by Jill over at Breaking the Spine. For my WoW this week I chose To Be Mona by Kelley Easton. I first saw this was coming out in I think October of 2010 but it was actually a reprint. I like the cover a lot better than the first one. 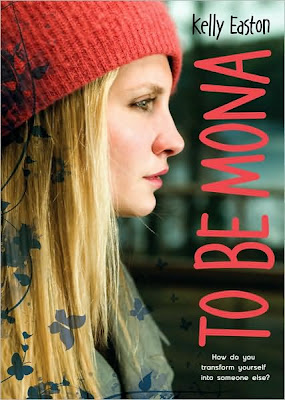 Sage Priestly is seventeen, and she longs to reinvent herself -- to strip away the fat, the past, the crazy mom, the unpaid bills. She longs to be her own version of the gorgeous and popular Mona Simms.

Sage starts dieting and exercising. She gets blond highlights and throws away all of her black clothes. Bit by bit she transforms herself. This is deeply troubling to her best friend, Vern, who is secretly in love with Sage just the way she is. But the boyfriend Sage wants -- the popular jock Roger -- suddenly notices her. And when they start dating, Sage thinks her life is turning around.

So why isn't Sage happier? Yes, Roger is a little too controlling and pushy, but isn't that what boys are like when you date them? What is it about the image Sage has created that just doesn't fit?

Smart, honest, and tough, Sage is a teen with more going for her than she thinks, but she still has a lot to learn.

What is your WoW for this week?
Posted by The Obsessive Reader at 11:17 PM

This looks like a good book. Hope you enjoy it when it's released :)

Thanks so much for visiting my blog.

Gorgeous cover and what looks like an awesome plot! What more could you ask for?! *adds to wishlist*

(Diane) Bibliophile By the Sea said...

I don't read YA very often, but this sounds good. I also saw another YA: Shiver which seemed to appeal to me. ENJOY.

Sounds like a good YA read, Rachel.
Mine is here: (sorry I can't get the link thing to work)
http://psychoticstate.blogspot.com/2009/08/waiting-on-wednesday.html

Sounds like a very appealing ya to me Rachel..... i will put this on my future -read list.
Added you on my blogroll, love your writing.

Oooh... This does sound good. I'll have to add this one to my wishlist.
I love Wednesdays because I get introduced to so many books I've never heard of! :)

my WOW is here

Hi Rachel, I love your blog! I gave you an award, I could not see if you've had this one already, but I wanted to give it to you!

I've never heard about this one before. It sounds great! I can't wait for its release, to read it.

Thank you so much for WOW-ing this one. I hadn't heard of it but I'm adding it to my wish list now!

Love your blog header too!

An average book. But I agree. This cover looks a lot better than the other. The other looks more childish.

Looks like a cool book, with an important message I bet!