In My Mailbox is hosted by the Story Siren. I'm a little late doing this because I've been so busy so please forgive me.

The Monstrumoligist by Rick Yancey 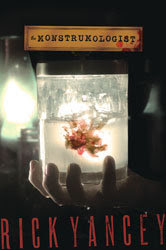 These are the secrets I have kept. This is the trust I never betrayed.

But he is dead now and has been for more than forty years, the one who gave me his trust, the one for whom I kept these secrets.

The one who saved me...and the one who cursed me.

So begins the journal of Will Henry, orphaned assistant to Dr. Pellinore War throp, a man with a most unusual specialty: monstrumology, the study of monsters. In his time with the doctor, Will has met many a mysterious late-night visitor, and seen things he never imagined were real. But when a grave robber comes calling in the middle of the night with a grueso me find, he brings with him their most deadly case yet.

Critically acclaimed author Rick Yancey has written a gothic tour de force that explores the darkest heart of man and monster and asks the question: When does a man become the very thing he hunts?

Hollywood Is Like High School With Money by Zoey Dean 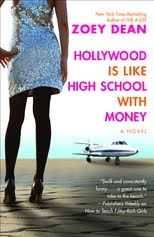 Twenty-four-year old Taylor Henning has just landed her dream job as an assistant at a major movie studio. But when her catty coworkers trick her into almost getting fired, she realizes that the old saying "Hollywood is like school with money" just may be true. The thing is, Taylor wasn't exactly a social butterfly in high school-how is she supposed to do any better the second time around?

That's when she meets her boss's popular sixteen-year-old daughter Quinn, and has an epiphany: maybe this teenager can teach her how to use her queen bee tactics to succeed in the Hollywood popularity contest. Quinn comes up with a plan to teach Taylor one lesson a week-everything from "Fake it 'til you make it" to "It's *never* your fault"--and soon Taylor finds herself winning the war against rival assistant Kylie. Until, that is, she's directed to steal Kylie's boyfriend, and something happens that's not in the game plan: Taylor falls for the guy. Now she must do the impossible-- harness her inner mean girl while staying true to herself.

The Anatomy of Wings by Karen Foxlee

Ten-year-old Jennifer Day lives in a small mining town full of secrets. Trying to make sense of the sudden death of her teenage sister, Beth, she looks to the adult world around her for answers.

As she recounts the final months of Beth’s life, Jennifer sifts through the lies and the truth, but what she finds are mysteries, miracles, and more questions. Was Beth’s death an accident? Why couldn’t Jennifer—or anyone else—save her?

Through Jennifer’s eyes, we see one girl’s failure to cross the threshold into adulthood as her family slowly falls apart.

How Shall I Tell The Dog? by Miles Kington which I won from Bites

When some people are told they have only a few months to live, they might travel around the world or write their memoirs or put their affairs in order. When it happened at the age of 66 to Miles Kington-one of England's best-loved humorists-he did what he did best, offering sharp, wry, laugh-out-loud observations and ideas about his situation. Following his diagnosis of pancreatic cancer, Kington proposes crazier and crazier ideas for his next book (what he calls "cashing in on cancer") in a series of letters to his
literary agent, Gill.

And what sort of things capture Kington's attention in his waning months? The sudden grimness of those 1,000 Places to See Before You Die books, for example. (What about 100 Things to Do Before You Die, Without Leaving Home?, he suggests. Instead of bungee jumping and whitewater rafting, learn to whistle with two fingers in your mouth, yodel, or steam open envelopes.) The irony that his dog, Berry, will probably outlive him, or the semi-outrageous idea of creating a funeral video:

The answer is quite simple.

Make a video in advance of my farewell speech, to be shown on a monitor, from the pulpit, or on a screen behind the stage, or wherever the best place would be.

I have already visualised the opening shot.

It is of me, smiling ruefully, and saying to camera: "Hello. I'm sorry I couldn't be here in person with you today."

Mischievous and utterly original, MilesKington's words in the face of death are memorable and surprisingly uplifting.

Set in modern-day Vietnam, Dragon House tells the tale of Iris and Noah—two Americans who, as a way of healing their own painful pasts, open a center to house and educate Vietnamese street children.

Iris and Noah find themselves reborn in an exotic land filled with corruption and chaos, sacrifice and beauty. Inspired by the street children she meets, Iris walks in the footsteps of her father, a man whom Vietnam both shattered and saved. Meanwhile, Noah slowly rediscovers himself through the eyes of an unexpected companion.

Resounding with powerful themes of suffering, sacrifice, friendship, and love, Dragon House brings together East and West, war and peace; and celebrates the resilience of the human spirit.

A Circle of Souls by Preetham Grandhi 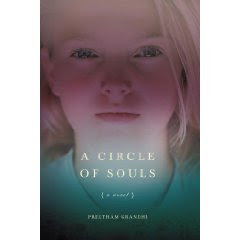 The sleepy town of Newbury, Connecticut, is shocked when a little girl is found brutally murdered. The town’s top detective, perplexed by a complete lack of leads, calls in FBI agent Leia Bines, an expert in cases involving children.

Meanwhile, Dr. Peter Gram, a psychiatrist at Newbury’s hospital, searches desperately for the cause of seven-year-old Naya Hastings’s devastating nightmares. Afraid that she might hurt herself in the midst of a torturous episode, Naya’s parents have turned to the bright young doctor as their only hope.

The situations confronting Leia and Peter converge when Naya begins drawing chilling images of murder after being bombarded by the disturbing images in her dreams. Amazingly, her sketches are the only clues to the crime that has panicked Newbury residents. Against her better judgment, Leia explores the clues in Naya’s crude drawings, only to set off an alarming chain of events.

In this stunning psychological thriller, innocence gives way to evil, and trust lies forgotten in a web of deceit, fear, and murder.

That's everything I got this week, what about you?
Posted by The Obsessive Reader at 8:59 PM

(Diane) Bibliophile By the Sea said...

What a cool cover on Monstrumology.

I have Dragon House by John Shors -hope to read it this week.

I just finished Dragon House and enjoyed it although it's tough to read the gritty details of street life for children. I'm looking forward to reading Circle of Souls.

Hey, we gave you an award! Check it out at

How Shall I Tell the Dog sounds wonderful. I'd way rather learn to whistle with two fingers than, say, see the South Pole. It's just a lotta ice, after all.

I really wanna read the anatomy of wings! Oh and don't feel negledcted. You're a great blogger and we appreciate you!

Thanks for visiting my blog!

You have some great reads there, lucky you.

I've just added you to my blogroll and will visit again.